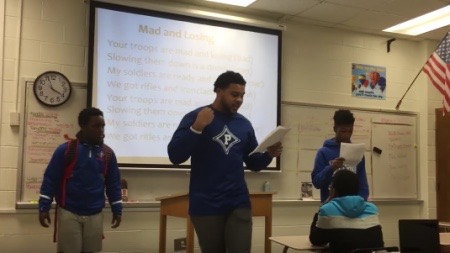 Teachers don’t usually receive the same level of attention as rap superstars. But when a clip of eighth grade social studies teacher David Yancey rapping about the Civil War to Migos’ “Bad and Boujee” made the rounds on Twitter in March, his non-traditional teaching method quickly caught the attention of Complex, Billboard, NBC News and more. The 32-year-old educator and football coach in Conyers, Georgia (located 25 miles East of Atlanta) has been incorporating rap music into his curriculum since 2014, rewriting the lyrics of his students favorite songs to wrap-up their standards-based lessons. We caught up with Yancey following his EduTubing presentation at VidCon 2017 to discuss why he finds rap effective in his classroom, how he’s dealing with Internet fame and why he’ll never quit his day job.

What was the first song you rewrote for your classroom?

Iggy Azalea’s “Fancy.” The idea came from one of my co-workers who said “I’m Coach Yancey” [to the tune of “Fancy”] to me. Once he said that, I was like, “Hmm, ok. Maybe not all of the kids would vibe with that song.” At the same time—and I had to creatively not say this in one of my interviews—I did a Bobby Shmurda song [“Hot N****”], and instead of the lyric “About a week ago,” I changed it to “About a month ago,” and made it about a government lesson we’d discussed in class about a month ago. As I’ve been making more songs, I’ve gotten more specific to really focus in on the standards for the kids.

How often do you do this?

Some people make the assumption that I can do this everyday. There’s no way kids can learn by me doing that [laughs.] I use it as a culminating activity after I’ve already introduced the material. For instance, when I changed “Bad and Boujee” to “Mad and Losing,” every facet of that song was something I’ve introduced before. We spent time dissecting all of that because we talked about the Civil War for about two weeks. It was a substantial part of the curriculum, so I said, “I better make something good for this.” And I’ve been blessed. The reception has been overwhelmingly positive.

Do you rehearse these songs before you perform them?

I have to. Middle schoolers are relentless [Laughs.] If I do anything wrong, it’s going to come back at me. I try to make each song as impactful as I can. If you do things second-rate, it’s not going to be received the way you want it to be. It doesn’t take me that long to write the core of it, but I practice and I want to include the really key elements of the standards so that they can piece it together through logic why we’re talking about it. Songs [that I’ve performed] like “Hello from the Cherokee” … I know I can’t sing like Adele. My kids find that out pretty quickly. But they know the content. I think my kids just like the fact that I’m trying, even if it’s not studio-ready.

For this end of year [event] that my school did, the sixth, seventh and eighth grade classes were all present. It’s announced that they’re going to hear something from Mr. Yancey and the entire eighth grade went pin-drop silent, because they know that when I’m in the classroom, I’m not a performer. I’m not Drake. I’m not Beyoncé. I’m a regular teacher. Anything can mess me up. I started doing my song and the eighth graders were loving it but sixth and seventh graders were losing their minds because they don’t really know me like that. They just see me on TV and they think that I can do this like it’s a concert. I’m really just doing it because it’s what I think is best for my group of kids, and I think any good teacher is going to do that.

How do your students reacts to your raps in the classroom?

I ask my kids at the end of every year—even before I started doing songs—“What could be improved about the class? When you think of Mr. Yancey, what comes to mind?” because if you’re not growing, you’re not relevant to kids anymore. I guess I’m known as “the rapping teacher” now and I get it, because not everybody does it, but it overshadows the fact that I give out a lot of notes. There are days when the kids know, “Mr. Yancey has to straight teach us stuff.” I try to create this sense of community and say, “Look, I want to be able to rap, but I’m not going to rap if I think you guys have no idea what I’m rapping about.”

What do you make of your new Internet popularity?

It’s completely overwhelming. I feel undeserving because there are so many great teachers out there doing great things. And they’re not rapping. I hope it doesn’t make kids think “You’re not doing it like that guy’s doing it.” Every teacher has something going for them that they can cater to their unique group of kids. I don’t know if I can fully accept how positive everyone has been about me because I’m like, “I want you to look at these people.” The state of public education is not as bad as what the government is telling you. It’s a shame what policy makers think is happening in schools. Kids are learning, kids are having fun sometimes.

At VidCon, I went to a panel on music because I realized, “Alright, I’m in this weird spot between education and music. If I really wanted to pursue just music, I could make educational raps and market that. I came to the conclusion at the end of that session that I’d rather be a teacher that makes raps sometimes, then a rapper that tried to so some teaching. I’m okay with not getting millions of subscribers, even though my [perspective] would get out there, and that’s really cool, I really want to stay teaching as long as I can. I just signed up for my doctoral program. Teaching is where I know my heart is and where I feel the Lord is driving me.

“The state of public education is not as bad as what the government is telling you. Kids are learning, kids are having fun sometimes.”

How did the opportunity arise for you to speak on the EduTubing Panel at VidCon?

There’s a guy named Malik Ducard, he’s the Global Head of Family & Learning Content Partnerships at YouTube. He caught an interest in my videos because his sons saw it all the way in California. There was also someone I went to high school with who was working for Malik. It was serendipitous. Myself and Malik had a Google hangout, we talked and he said “I see great things coming from this. This is a niche that needs to be filled. And it doesn’t hurt that you’re a black guy.” A lot of educators on YouTube are white. It’s just adding diversity and realizing that there are good, solid people out there can change some stuff.” He messaged me about a month later saying “We want you to come out to VidCon.” I had never heard of it before. I was very ill prepared for how crazy it was.

Did anyone recognize you?

No, and I expected that. [Laughs.] I have about 80,000 views on the “Mad and Losing” video and some of the people I met [at VidCon] have millions. But I went to a Carl’s Jr. on my walk home and the cashier asked me, “What are you in town for?” He could tell, I guess by my accent, that I wasn’t from around here, and I told him I presented on a panel at VidCon. He was like, “For real? What’s your name? I’ll look you up on YouTube.” So, he looked me up and he said “Yo! I saw you on Facebook!” If I told people who I was, they might know, but nobody instantly recognizes me. I’m not Jay Z.

What other projects are you working on?

I can’t share too much, but I’m working with the philanthropy arm of a company right now to put together some original songs that I’ll probably end up posting on Souncloud. It’s something I can give my students that’s straight from the standards, something legit and produced in a studio. I’ve got more Friday Findings videos on the way. I’ve got a few more weeks left of summer and then I’ll be back in the classroom.

I have to ask … Did you ever hear from the Migos?

Apparently, the clip that Josie posted on Twitter was retweeted by Migos. I emailed them a little later but never heard back. I didn’t expect to get a response. They’re extremely busy [Laughs.] I just saw they went viral again from their interview at the BET awards. I could understand everything that [Takeoff] was saying, but everybody else around the country was like, “Huh?” We’re from Atlanta, that’s the twang!